Back in March of this year, I transferred teams within Red Hat and joined the Ansible Core team to work primarily as a release engineer/release manager. Shortly after joining, I shadowed how releases were cut, and from there began to cut releases myself.

I’ve had a number of people including some friends ask how we handle our branching and release schedule and cut releases, so I wanted to address that and discuss it some.

In what follows, I use the term “Ansible” to refer to both: ansible < 2.10 and ansible-base >= 2.10. “Ansible” – the community distribution of collections – follows its own development cycle, independent of ansible-base.

Keep in mind that this process does change over time, so this post is likely to become outdated as time goes on. As a recent example, when I started, we no longer published release candidates for every patch release1, and I have pushed to start doing them again.

At any given time, 3 z-streams of Ansible are supported. Currently, the supported z-streams are 2.8, 2.9, and 2.10. This means that we must release bugfix and/or security updates for each of these streams and keep them tested and working. We do not backport features into already-existing z-streams, only bugfixes and security updates.

In ansible/ansible (which is the home of ansible-base >= 2.10 as well as Ansible < 2.10), we use the devel branch as a continuous development stream, and stable-* branches for work that corresponds to existing releases of Ansible or ansible-base (one for each z-stream). We have documentation published which explains how the backport process works.

In short, nearly all features, bugfixes, and security patches happen in the constantly-moving devel branch. Bugfixes and security patches can, in most cases, be backported to the stable branches and land in the next z-release for each one (so long as they comply with the policy linked above). 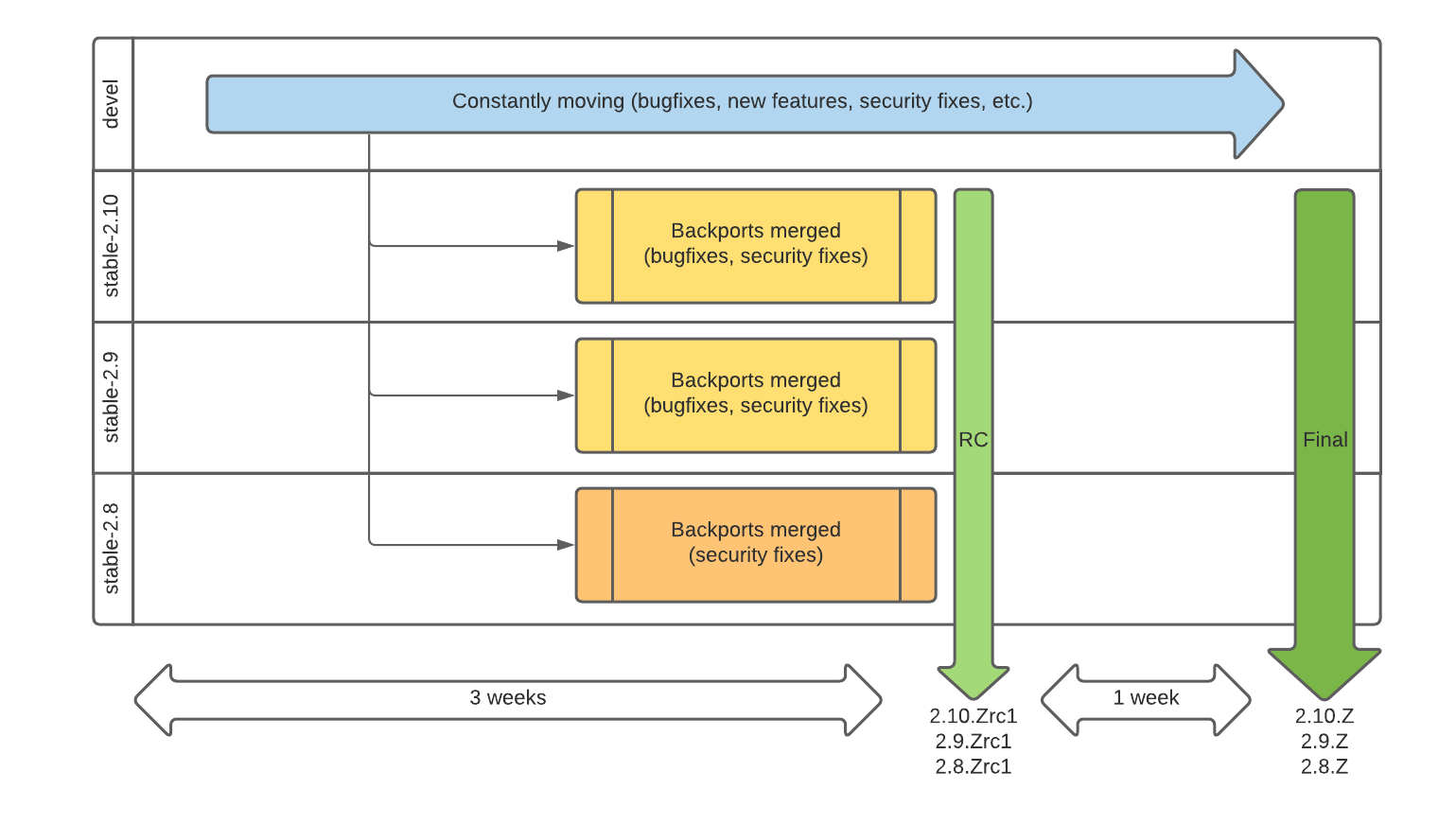 When I came onboard and took over release engineering duties, I pushed for starting release candidates for z-releases again. This was largely due to some regressions in published z-releases that should have been caught much earlier but weren’t, along with some pressure from teams both internally and externally for more opportunities to test a release before it is published. The lesson and mantra was that we have people willing to help us test early, let us help them help us.

This is also why it is critical to keep releases flowing and make sure the cycle stays consistent – putting out a new release candidate 3 weeks after a stable release has gone out. We want to be able to say “Sorry, we had to revert this backport because it broke something. But that’s no big deal! There’s a new release candidate coming out in 3 weeks, just get it fixed up for that!”

There are tests that get run throughout all of the process. ansible-test is a powerful tool for testing both Ansible and collections, and the Ansible repository uses it in combination with an extensive suite of unit and integration tests.

Tests are run on every pull request into devel and every backport pull request. Heuristics are used to determine which tests to run, based on which file has changed. A full run of the test suite happens both nightly and as part of the actual z-release process itself, where we require (as part of our checklist) that tests are green before continuing.

In addition to this release and pre-release testing, the reintroduction of release candidates has given teams (internally and externally) a week to test each z-release and report issues to us before the stable version comes out.

Lastly, I have created an independent project, aut which uses Travis CI and Docker to test our published artifacts and make sure they landed where they were supposed to and work well enough to run a simple “hello world” playbook. The details are available in the project repository, but effectively, it just creates a build matrix where it will test our releases.ansible.com artifacts, our PPA artifacts, our pypi artifacts, and so on. It is meant to act as a post-release test that simply serves to help me sleep better after a release, knowing that the artifacts at least run.

The actual details of the release process are published as a (slightly outdated but mostly accurate) checklist.

Most of the actual release work – distributing the artifacts to where they need to go – is done through an internal Jenkins instance. Currently the build scripts that Jenkins uses are not published, but I have plans to clean them up and publish them on GitHub soon.

I find that release engineering is an exciting role to be in. While it comes with a lot of trust and responsibility, it also comes with an enormous amount of opportunity for impacting change.

Release engineers/managers live in an integral part of the project, coordinating the structure between developers, testers (or those willing to play that role), and users, and balancing processes to make each group happy. There is much that can be said about how to best manage and achieve that goal:

These are the kinds of questions that I keep in mind as part of my primary role on the team, and although I am learning the codebase itself and enjoy hacking on it, these kinds of release engineering questions are at the forefront of my mind at all times.

If you have questions about our process or want to chat with me or discuss ideas, I am always available on IRC. Feel free to ping me (relrod) in #ansible-devel on Freenode!